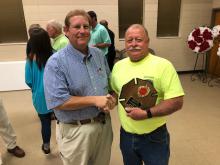 Firefighter of the Year Bill Alexander

Drew Wade has been the Chief Operating Officer of West Alabama Bank in Reform, Ala. since 2007. Wade graduated from Pickens Academy in 1989 and then attended Marion Military Institute before graduating from the University of Alabama with a bachelors degree in business in 1994. In 1994, Wade started his career at West Alabama Bank, the bank that his grandfather, John Wade, started as The Bank of Reform in 1944 and his father, Andrew C. “Bubba” Wade worked at from 1963 until 2017. Drew is married to the former Ashley Pate of Carrollton and has three children named William, Andrew, and Mary.

Wolfgang Lodman visited the Aliceville Museum recently with the desire of tracing his late father's path from Germany to Aliceville, where he spent time in the 1940s during the World War II POW camps. His father, Peter Klaus Lodman arrived in Aliceville on June 2, 1943 and Lodman said he believed that his dad was one of the first to arrive here in Aliceville. Lodman arrived in New York on a cargo ship, just as his father had came over to the United States and then took the train from New York to Tuscaloosa, where he then rented a car to get from Tuscaloosa to Aliceville.

Journey Detox and Recovery, LLC, founded in 2012 at Clay County Hospital by CEO Lamar Ward and CFO Kathy Evans. The program is an inpatient medical detoxification and recovery facility where all phases of recovery are managed. The program's priority is to help patients detoxify their body without putting any other chemicals into the body, such as suboxone, a drug that is used to treat pain, as well as addiction to narcotic pain relievers. 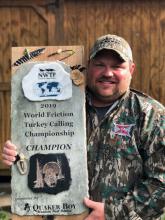 Gordo resident and councilman Terence Williamson recently won the 2019 NWTF World Friction Turkey Calling Championship. Williamson is a Construction Manager for ALDOT over the Greene, Pickens, Marion, Lamar, Fayette, Winston, and Walker Counties.
Back in February, Williamson and teammate Hunter Wallace won the Grand National Turkey Calling Contest in Nashville, Tennessee and after competing in both competitions numerous times, Williamson was finally able to win both competitions for the first time in 2019. 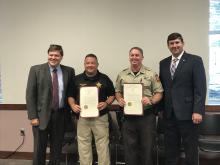 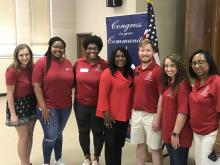 Congresswoman Terri Sewell held a Town Hall meeting at the Carrollton Service Center last Friday at 4 p.m. where she met with Pickens County constituents to discuss healthcare issues, specifically rural healthcare and the Pickens County Medical Center.
Before the Town Hall meeting, health screenings were available to all at the service center. Pickens County was Sewell’s sixth stop on her 2019 Congress in Your Community tour, which includes 14 counties in the 7th Congressional Disctrict.