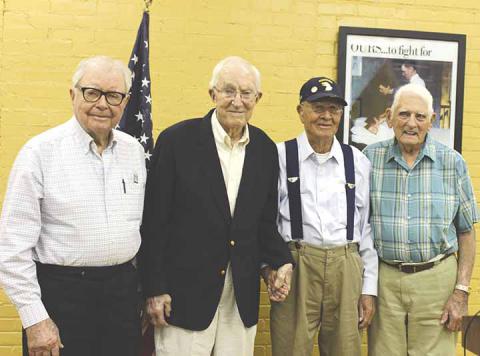 Residents of Pickens County had the opportunity to experience a treat on Thursday, April 11th at the Aliceville Museum. Bradford Freeman, a 92-year-old former member of ‘The Easy Company ‘of The Band of Brothers, that parachuted in before D-Day on the beaches of Normandy.

Freeman was born on September 4, 1924 and raised on a dairy farm in Oktibbeha County, Miss. He was one of eight brothers and sisters, and his parents rented land to help run their farm. When he was 18, Freeman went away to college at Mississippi State.

“They told me that I had to register and whenever we talked that over, they said if I would stay, they would let me finish my year of school and they did,” Freeman said. “So, I volunteered and on December the 12th they swore me in, and I was 18. I went on to Camp Shelby. I wore a six shoe and they didn’t have a size six, so I wore my Sunday shoes to Fort McClendon, Alabama.”

He said they did eventually get him some size six shoes. After 13 weeks there, he went to Fort McClendon, Georgia and joined the Paratroopers.

In November, he was on his 5th plane. He did his first night jump on November 1st and he was on one of two planes that jumped that night. The first plane crashed and killed 19 people, so he was allotted 14-day travel time to North Carolina, where he spent Thanksgiving Day. He then entered foreign service on Feb 5, 1943. He was then on a boat for roughly two weeks and he went to the 101’s, where he made Corporal when he was in the 152nd. When Freeman arrived, he was demoted to a PFC and kept that rank the rest of his time.

“I was in the Mortar Squad,” Freeman said. “I wasn’t one of the first that was doing the big fighting, but what they wanted with from a mortar they got it.”