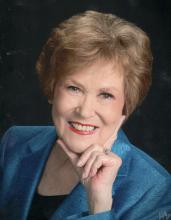 Julia Annette Munroe, 84, of Talladega passed away on Monday, November 14, 2022. A funeral ceremony was held in her honor at First Methodist Church of Talladega on Friday, November 18, 2022 at 1:00 P.M. with Terry Bentley officiating. The family received friends at Usrey Funeral Home on Thursday, November 17, 2022, from 5:00 P. M. until 7:00 P.M. Interment followed directly after the service at Oak Hill Cemetery.
Julie Munroe was born on December 26, 1937 in Reform, AL to Stanley Doughty and Sallie McGahey Doughty. She graduated from Pickens County High School, attended Mississippi College for Women, and graduated from the University of Alabama with a Bachelors of Science in Education (Home Economics). After graduation she worked as a flight attendant for Eastern Airlines based in New York City. She moved to Talladega, AL after taking a job with the Alabama Extension Service where she met the love of her life, Wren Munroe. Together they raised 3 sons, Calvin “Cal” Wren Munroe Jr.(Ginger), Mitchell Stanley Munroe (Kim), and Scott Michael Munroe (Anna), 8 grandchildren and 1 great-grandchild. She was known as “Grand” to her grandchildren, Calvin Wren Munroe III, Jake Munroe, Ally Munroe, Macon Munroe (Finley), Zach Munroe (Robbyn), Nicholas Munroe, Noah Munroe, Ella Claire Munroe and great-grandson, Robert Hutton Munroe. She is also survived by her sister, Nellene Kyles, sister-in-law, Doris Munroe(Dan), and nephews and nieces from the Munroe and Kyles families.
The family would also like to thank special caregivers Anita Hearn, Tonette Wells, Gladys Garrett, Judy Rouse, Sharon Roberson, Marvia Cotton and Carolyn Tuck.
She was preceded in death by her parents, Stanley and Sallie Doughty, brother, Rufus and his wife, Lucy, and brother-in-law, William Kyles.
She was a member of the Talladega Study Club, The Holly Garden Club and Junior Welfare League. She served as a PTO officer and substituted for the Talladega City Schools. She taught Sunday School for over 20 years during her time at Trinity United Methodist Church. She was a member of First Methodist Church of Talladega where she attended the Clardy Fellowship Sunday
School Class, served with the United Methodist Women (UMW) and the Church Council. Julie loved sewing, painting and gardening. In her later years she was an unselfish and strong caregiver for her husband and family.
Active pallbearers will be her grandsons.
In lieu of flowers, the family kindly requests for donations to be made to the American Cancer Society, First Methodist Church of Talladega, or The Red Door Kitchen in Talladega.
Online condolences may be offered at www.usreyfuneralhome.com.
Usrey Funeral Home of Talladega is assisting the family.