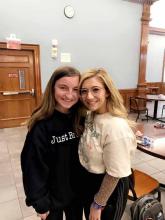 When Libby Baines was in third grade at Pickens Academy, in 2010, Mrs. Cynthia Colvin always assigned pen pals from a school in Birmingham called Advent Episcopal. Little did Libby know that she would reconnect with her pen pal 10 years later, as they both attend Samford University, where Baines is studying pre-pharmacy.