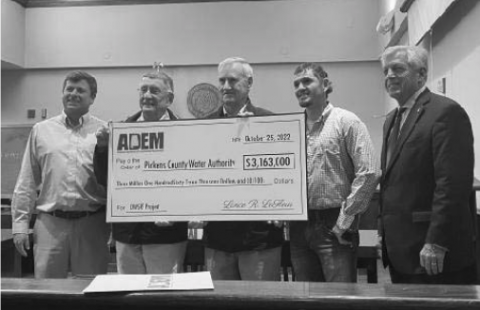 CARROLLTON – Officials with the Alabama Department of Environmental Management (ADEM) were joined by state Sen. Gerald Allen and state Rep. Rodney Sullivan in Carrollton to award $12 million in grants to repair and upgrade water and sewer systems in Pickens County.

The money is going to the Pickens County Water Authority, the City of Reform and the Town of Gordo. It’s part of $473 million in grants and loans that ADEM plans to award this year to public drinking water and wastewater systems in Alabama to deal with crumbling, malfunctioning and overwhelmed infrastructure. At least $122 million of that funding is going to Pickens and other Black Belt counties.

“Many water and sewer systems, like those here in Pickens County, are in need of repairs and upgrades that they simply cannot afford,” said ADEM Director Lance LeFleur. “We are grateful to Governor Kay Ivey and the Alabama Legislature for recognizing those needs and making funding these projects a priority. We were pleased to work with city, town, county and water authority officials here to help them get the resources they need to provide better service to their citizens.”

The City of Reform was awarded $5.5 million to upgrade its water system, and $1.5 million for sewer work, which includes a new pumping station and repairs.

Meanwhile, the Pickens County Water Authority received $3,163,000 for upgrades to a well and water treatment plant.

“We knew there were tremendous needs, and that the water and sewer systems in my district particularly needed a lot of help,” Sen. Allen said. “When this funding came available as part of the effort to recover economically from COVID, it just made sense for us to direct it where it would have long-lasting benefits for people. Plus, rural areas like these were hit just as hard by COVID as some of our bigger cities.”

“If you think of the necessities of life, nothing is more critical than clean, safe water,” he said. “Residents in rural areas tend to have more issues with getting and maintaining good water supply. And due to the dense soil here that can make it difficult for wastewater to be absorbed into the ground, a lot of people have trouble with their septic systems. These funds will certainly help, and we are happy to make them available.”

Funding for water and sewer projects across the state is coming from several sources.

In a Special Session in January called by Governor Ivey, the Legislature approved spending $225 million out of the state’s American Rescue Plan Act (ARPA) funding to help public water and sewer systems with the greatest infrastructure needs.

ADEM is supplementing the $225 million with other federal and state funds. The Department expects to receive $765 million over the next five years ($137 million in 2022) from the Bipartisan Infrastructure Law passed by Congress last year, and is combining that with $111 million in grants and loans through the State Revolving Fund (SRF) programs. That brings to $473 million the funds ADEM expects to commit this year to water and sewer systems, with more to be provided in coming years.

After the funding was announced earlier this year, nearly half of the state’s 1,061 public water and sewer systems statewide submitted requests for projects totaling more than $3.2 billion. To date, ADEM had awarded funding to systems in three-fourths of Alabama’s 67 counties.

ADEM has created a webpage, www.alabamawaterprojects.com, to provide the public with information about the program and regular updates on grant applications and awards. The webpage includes links to lists of the water and sewer systems that have applied for grants and loans, as well as those systems that already have been awarded funding. You can also access the information through ADEM’s website, www.adem.alabama.gov, under the “ARPA/SRF Updates” button.