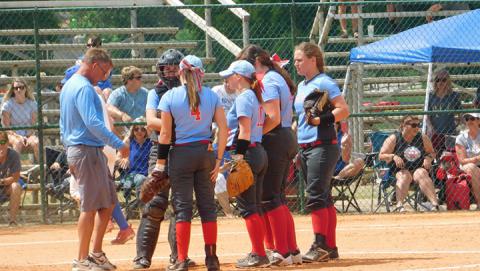 The Lady Pirates started the state tournament strong on Thursday a week after afternoon, steamrolling Lowndes Academy 10-0 after winning the regionals comfortably last week. Then in the second game, against Edgewood — and as a matter of fact, for the rest of the tournament — the hitting woes reared their ugly head again. Shelby's pitching was downright dominant, as no opponent managed to hit a ball out of the infield all tournament, yet Pickens Academy still managed to lose two games because of their troubles at the plate.

"That's kind of been the tale all year long," Pickens Academy coach Wade Goodman said. "We, for us to be able to win a state championship — and that's our goal and it's been our goal every year since I've been there — we have to be able to do the little things and that's bunt, field bunts, move runners over, and make the routine plays. We were not very good at that this year and that's solely my responsibility. It's my responsibility to get the girls to where they can do that and we never got to where we could do that."

The Lowdnes Academy game seemed like a walk-through compared to the difficulty of the games soon to follow at Lagoon Park. The Lady Pirates led the Lady Rebels 1-0 in the bottom of the fourth, when PA turned it on and scored seven runs to take an 8-0 lead. It appeared that Pickens Academy had come to Montgomery with bats a blazing.

Lowndes Academy pitcher Laiken Hussey got worked that inning, as Carleigh Cameron hit a double to center field to score Courtney Dudley and Lilly Lowery for a 3-0 lead. Baylee Jaynes then singled to score Cameron, making the score 4-0. With two runners in scoring position, the Lady Rebels walked Shelby Lowe to load the bases. Britney Fitch would score on a wild pitch to increase the lead to 5-0, followed by a Caroline Lewis double that made the score 6-0. Dudley then singled to right field, sending two runners home and giving PA an 8-0 lead after four innings. The Lady Pirates would add two more runs in the bottom of the fifth for a 10-0 win.