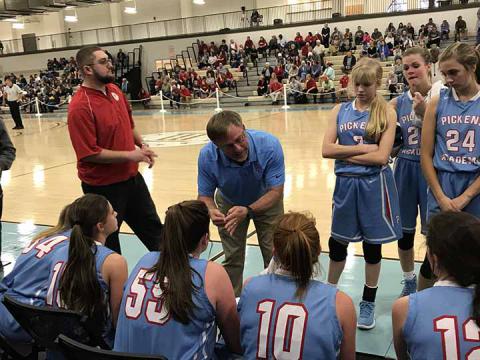 Pickens Academy coach Wade Goodman goes over strategy with his team during a timeout.

The Lady Pirates fought back from a four-point deficit with just over a minute left to take a one-point lead, however, Lowndes Academy would score with 25 seconds left in the game to win 31-30.

“It’s a tough loss and it needs to hurt,” Pickens Academy head coach Wade Goodman said. “When they hurt like that and we’ve got four juniors and a couple sophomores coming back, that should make them get in that gym and get better. We didn’t do that this year. It needs to hurt so bad that it gets them in the gym.”

Pickens Academy started out strong, as Audrey Fondren grabbed a steal and scored for a 2-0 lead. Caroline Lewis then made a basket to put the Lady Pirates in front 4-0. Lowndes Academy would finally get on the board when Hannah Claire Till made a basket after the Lady Rebels made five offensive rebounds on one possession, infuriating Pickens head coach Wade Goodman.

Britney Fitch made a jumper to push the Lady Pirate lead back to 6-2 with 1:42 left in the first quarter. Fitch was fouled on a shot at the first quarter buzzer sounded and converted 1-of-2 free throws to give Pickens Academy a 7-4 lead after one quarter.

Helen Oglesby banked a shot off the backboard to cut the Lowndes Academy deficit to 7-6 to start the second quarter. There was a scary moment in the second quarter, as Lowndes’ starting center Madelyn Taylor went down and hit her head hard on the floor. Taylor would walk off under her own power, but would not return to the game.

The Lady Pirates would take a 10-6 lead when Carleigh Cameron made a steal and passed to Lewis, who was fouled and converted both free throws. Lowndes would take its first lead of the game when Oglesby converted two foul shots to put the Lady Rebels ahead 11-10 with 1:20 left in the second quarter. Neither team would score again in the first-half, with Lowndes taking a one-point lead into the locker room.

“We’re a defensive team, we pride ourself on defense and I thought we won every quarter,” Pickens Academy head coach Wade Goodman said. “We dominated for 7 ½ minutes of the (second) quarter, and then they have a five-point run at the end of the quarter and they take the lead.”