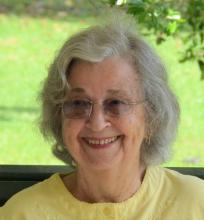 Mary Ann Jones Junkins, age 91, of Collierville, Tennessee and formerly of Aliceville, AL, passed away January 9, 2023 at Germantown Methodist Hospital in Germantown, Tennessee. A graveside service for family was held 12:00 noon Saturday, January 21, 2023 at Oak Grove- Franconia Cemetery with Rev. Gene Lankford officiating and Skelton Funeral Home of Reform directing.
Mary Ann was born in Aliceville, Alabama on December 3, 1931 to Needham Bryant Jones and Martha Ann Heritage Jones.  The youngest of seven children, Mary Ann grew up on a farm that her father managed. After graduating High School she attended Business School in Birmingham, then returned to Aliceville to work as a secretary for the town’s doctors. She married Earl Dean Junkins on December 20, 1956. She was proud to be a Navy wife and enjoyed living in Rhode Island, California, Hawaii, England, Maryland, and Louisiana.  She had been a widow since 1995 and upon returning home to Aliceville, Mary Ann was very involved in the Aliceville United Methodist Church.  She loved to read and was known for her quilting, oil painting, and Raggedy Ann and Andy dolls. At the age of 82,  Mary Ann moved in with her eldest daughter in Amite, Louisiana. A year later she moved to Collierville, Tennessee near her eldest son. She had been a resident of Hearthside Senior Living in Collierville for over 8 ½ years.
She is survived by four children, Melinda Yantis (Loudon), Paul Junkins (Lisa), Alan Junkins  (Sally), and Amy Irvin;  twelve grandchildren and thirteen great-grandchildren.
She was preceded in death by her husband, LCDR Earl Junkins; her parents; two sisters, Martha Walker and Betty Pate and four brothers, Webster, James, John and Needham Jones.
In lieu of flowers the family suggests memorials be made to Aliceville First United Methodist Church, P.O. Box 409, Aliceville, AL 35442.