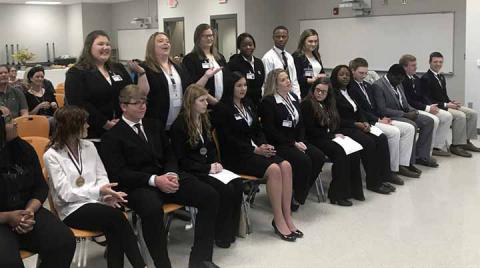 The April 15th Pickens County Board of Education Meeting began by recognizing the Pickens County College and Career Center students who competed at the HOSA state competition in Montgomery last month.

“Mrs. Lavender was texting me the day of and leading up to the competition and she said, ‘We’ve had some awesome, awesome experiences down here, you may want to ride down here if you find time’, so I called Mr. Mullinex and he had something, but I said we could help reschedule that,” Superintendent Jamie Chapman said. “Me and Mr. Mullinex got in the truck the next day and we hauled boogie and it was a great day. That’s what I miss about teaching, because these students from Pickens County, Alabama held their own with everybody from the Hoovers, the Vestavias, the Homewoods, the Spain Parks. We held our own.”

Natalie Lavender then introduced each individual student, after giving a short speech about the group.

“I’m not going to even sugar coat it, we are prideful and very bragging tonight,” Lavender said. “We have representation from all four high schools in the district that went to state and won at the state level. We had 80 that competed in round one back in December. We then had 24 make the cut for round two and we have a good many of those here tonight. We have some that are gone out of town for their science class with Mr. McDaniel right now.  Out of our 24 that made the round two cut, we have 13 make the top six and out of those, we had 12 that made the top seed to go international conference (in Orlando, FL) and represent our county.”