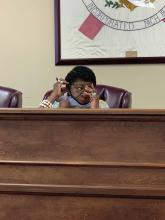 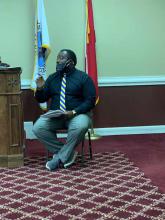 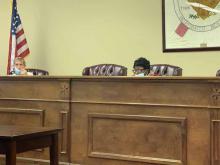 Aliceville Police Chief Tonnie Jones mentions to the council that the city needs to do more to honor police officers and first responders on September 11.

The September 11, 2019 Aliceville City Council meeting began with Warren Lavender calling the meeting to order, as Mayor Marva Gipson was absent for the meeting. The first item discussed by council was regarding Sunday alcohol sales. Since Mayor Gipson, nor City Attorney John Russell was available, the council chose to table the item until a later date. The motion was passed unanimously. The council then made a motion to pass the 2019-2020 budget. Without Mayor Gipson being at the meeting, the council also voted unanimously to table a vote to pass the 2019-2020 budget.

The City of Aliceville Council met on April 24th and began the meeting by discussing unfinished business. The first item discussed was the rental agreement for the old National Guard armory for events. City Attorney John Russell III spoke concerning the need to establish regulations. Russell recommended that alcoholic beverages not be served at events there.

Aliceville City Council's meeting on March 27 was very brief, as the first item under unfinished business was Mayor Marva Gipson discussing that at the March 13th meeting, Councilman Terrence Windham discussed the council meeting in a separate board meeting to discuss some of the city's matters. Gipson mentioned that the council would hold the board meeting on March 28.

Grants are the Key for Growth

The Aliceville City Council approved the application for new police officer cadet, Kimberly Manning, at their latest meeting on June 27. “Chief (Tonnie) Jones and myself have reviewed several applications,” Aliceville Mayor Marva Gipson told the council. “We have one applicant and we need to approve for her to take a pre-qualification test.”