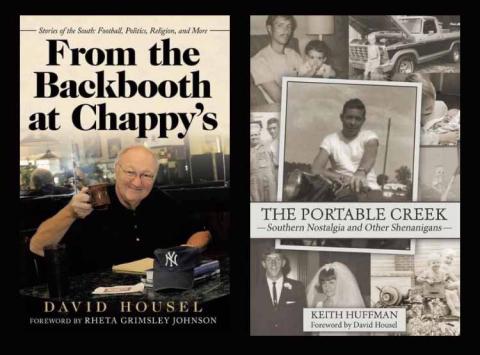 Being hailed as the “Biggest Literary Event in Gordo History,” Alabama One Credit Union will sponsor an in-person book signing by two Gordo natives at the Ruth Holliman Public Library during Mule Day weekend on Saturday.

Huffman, a 2005 graduate of Gordo High School and a 2010 graduate of The University of Alabama, is a mental health therapist. He has worked as a journalist, writing for the Pickens County Herald and Opelika-Auburn News, where he contributes a feature column.

About Saturday’s upcoming book signing, Housel said: “It’s always an honor to go back home, and Gordo will always be home to me. That place and the people made me what and who I am. The underpinnings were there.”

Now living in Auburn, Housel said, “Even though it’s been 56 years since I left there, I’m sure it’s the same way now. Good people begat good people. And Gordo is good people.”

Housel noted, “It’s interesting that Keith and I will be signing together. It’s a multi-generational signing, and I find that quite interesting, affirming really. The same qualities that supported me and got me started when I was there are the same qualities that got Keith started on his way. “The names and faces may change, but ole Gordo is still Gordo.”

Huffman added, “My childhood and many other meaningful experiences took place in Gordo. It’s the little town where my kinfolk embraced the good times and learned a little something from the bad ones. It’s the town where my great-great-grandfather, Alf Sanders, fought a Sipsey Swamp wild cat in a drunken cage match, as well as where my other grandfather, Lee Makelin Huffman, had his crop planted by kind neighbors after a tree fell on him and broke his back in multiple places. Gordo is also the sacred land where Mawmaw Sue and Pawpaw Jim took me fishing, where my mother taught me resilience, and my father proved that few things can rival a man’s love for a rusty Plymouth Fury, or a black and silver 1979 Ford F-150. These are the kinds of stories and memories I’ve been blessed to write about and preserve, and Gordo is where it all happened.”

Huffman concluded by saying, “The fact that I get to share the ‘Biggest Literary Event in Gordo History’ with Mr. David Housel, who’s legendary in Gordo and Auburn, is something I’ll cherish. I’m very blessed.”