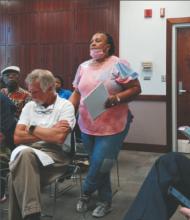 CARROLLTON- The Pickens County Board of Commissioners meeting took place on July 26, 2022. The meeting was called to order by Chairman Jerry Fitch and began with citizens' public comments.

The first public comment came from Donny Sanders of the Pickens County Water Authority concerning the change in location of the pumping system.

CARROLLTON- The Pickens County Board of Commissioners meeting was held on May 5, 2022. The meeting was called to order by Chairman Jerry Fitch.

A motion was made by Commissioner Mark Gray to approve the payables and to adjust the claims listings in new business. Commissioner Drew Elmore seconded the motion, and it was approved.

CARROLLTON - The January 12, 2021 Pickens County Commission was called to order by Commission Chairman Bobby Ingram with all commissioners present. The December 22, 2020 meeting did not meet quorum due to several of the commissioners being under COVID-19 quarantine, so several items from the agenda of the December 17th administrative meeting were also discussed under new business.

The minutes of the August 13, 2019 meeting were approved and under new business, the commission voted to declare a Canon copying machine in the appraisal office as surplus and authorize its disposal. The next item under new business was also dealing with the appraisals office. It was approved, just two weeks after it was approved for the Sheriff ’s office to purchase two F-150s that the appraisals office was approved to purchase two of the trucks, however, Revenue Commissioner Michelle Kirk said that the money used for the trucks would not come from the county’s budget.

The newly-formed Pickens County Commission, containing two newcomers in the form of District 2 Commissioner Bobby Ingram and District 5 Commissioner Mark Gray, met for their first administration meeting the morning of Nov. 27. After general business was conducted, District 4 Commissioner Jerry Fitch raised the issue of a new motor grader for each district, an issue he had brought to the Commission’s attention several times before.